Certain diseases attack the peripheries before vectoring in on vital organs. Following a similar trajectory is the European debt crisis, moving ever closer to the core. Italy and France are now especially vulnerable.

They have large populations, an educated and productive workforce, well developed infrastructure and considerable economic and social capital. Both countries are major agricultural and industrial powers, strong in advanced technical products, luxury goods, food processing, pharmaceuticals and fashion. Both are major exporters and significant tourist destinations.

France even has a favorable demographic outlook, with a birth rate just above replacement level mainly among its immigrant population. They are simply too large to fail

But Italy and France share problems of slow growth, unemployment, poor public finances and structural problems. They have found it difficult to reform and face an increasingly tough political environment.

France and Italy cannot avoid a financial crisis in an environment of low growth and low inflation. Real GDP growth would need to be around twice the current projected rates to stabilise and then reduce government debt-to-GDP ratios. 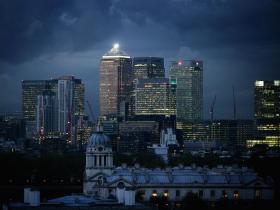 How the next financial crisis will spread around the world

The required fiscal adjustment to start reducing government debt is around 2 per cent of GDP, which would reduce the growth needed to reduce leverage.

A combination of weak economic activity and low inflation is causing Italy’s debt trajectory to spiral upwards, despite austerity and a primary surplus of 2 per cent of GDP. In France, there is no sign that the budget is likely to be in surplus in the near future.

The real problem is the lack of competitiveness, and underlying many of these problems is the single currency.

Before the 2015 fall in the euro, after the European Central Bank introduced negative interest rates and quantitative easing, Italy and France were faced with a 15-25 per cent overvalued currency. This was compounded by the high leverage to the exchange rate for export competitiveness.

Italy has a gearing of over 60 per cent to the exchange rate, due to the nature of its exports, compared to around 40 per cent for Germany. Denied the option of devaluation to maintain international competitiveness, both countries have relied on debt-funded public spending to maintain economic activity and living standards.

21 maps and charts which will challenge perceptions of Europe

In the absence of a favourable exchange rate, Italy and France face the difficult task of large internal cost reductions to regain competitiveness.

As the experience of Greece, Spain, Portugal and Ireland illustrates, this is a brutal and not always successful process. The adjustment would be assisted by strong export markets. But low growth in developed and emerging markets as both private and public sectors try to deleverage means that global demand is likely to remain muted.

In early 2015, in an interview with the Italian state TV network RAI, the then Greek Finance Minister Yanis Varoufakis argued that the euro was fragile like a house of cards. It would collapse if Greece withdrew or was forced out on the single currency.

He pointedly told his hosts that, “Italian officials – I can’t tell you from which big institution – approached me to tell me they backed us but they can’t tell the truth because Italy also risks bankruptcy and they are afraid of the reaction from Germany”.

The global economy is no Lazarus – the outlook is bleak

His observation that Italy’s debt levels were unsustainable drew an immediate response from Italian Economy Minister Pier Carlo Padoan, who tweeted that Varoufakis’s remarks were “out of place”. Italy’s debt was “solid and sustainable”, he said.

The response was characteristic of Italian and French denial of the precariousness of their position. There is no acknowledgement of poor economic performance, high and rising debt levels, unacceptable fiscal outlook, and the need for far-reaching structural reforms.

There is no willingness to address the problems of the euro and the incompatibility of monetary union and a single currency with national fiscal management and sovereign independence among eurozone members. Both the population and their representatives refuse to face reality.

Cheaper energy prices combined with low government borrowing costs and a fall in the Euro, driven by the actions of the European Central Bank, cannot hide these deep-seated and unresolved problems forever.

Satyajit Das is a former banker and author. His latest book is ‘A Banquet of Consequences’